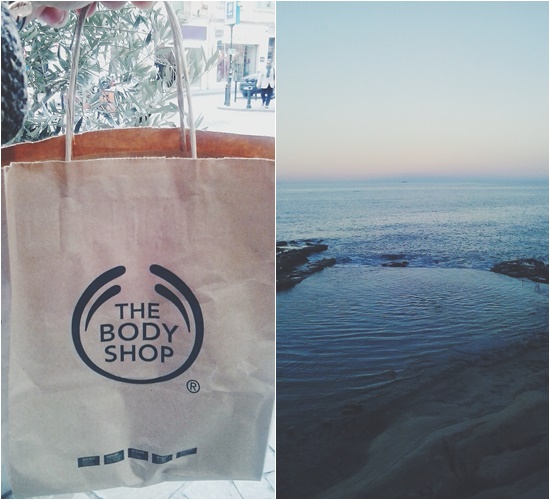 I think the title of the post is pretty much explanatory, isn´t it? Two of my favourite things combined on the same period of time seems impossible but sometimes destiny knows better..

Weather in Malta has been a little bit crazy this week, there were days where I woke up with the sun shining and immediately seconds after it was pouring like mad. Also the amount of cold I´ve been putting up with this weekend has been insane, I think I´ve never been that cold in my life –okay, maybe I´ve been when I was in Belfast let´s not forget- but I was freezing to the point I couldn´t sleep because my feet where on the edge of frostbite –no jokes it was like that.

Bad weather has given a little rest during the weekend and although it has not been particularly hot it hasn´t rain which is always a plus. I was able to go shopping, and I ended up picking a lot of stuff from The Body Shop. I don´t think I have ever purchase something from them but I was actually surprised by the sales! They had lot of products with very good discounts, I´m very excited to try all of the things I bought.

As I have had a very relaxed week at the office, I´ve been able to enjoy long walks on the sea side before the sun hid. And I don´t think I´ve ever seen such a beautiful sky, but everyday a different one. No wonder everyone on the walk was taking pictures by the sea, it was beautiful!

Tomorrow it starts the last week of January. Rather excited for this month to end to be honest..

How was your week?

2 thoughts on “The Malta Diaries #9: Shopping And Sunsets”